The plan was to cycle around the island of Singapore, staying as close to the coast as possible. Fortunately the rains stopped by 4pm on Sunday, 7th of Feb 2016, the eve of the Lunar New Year, and I started at 4.30pm from my usual place at the East Coast Park near the Siglap connector.

I headed west, hoping to cover new regions in that direction before the rains returned. The other advantage of heading west first was that I got to see the eastern regions the next day in the early morning light, something I had not experienced before.

Picking the new year eve, and continuing overnight to the following day turned out to be a good choice as the roads were essentially deserted, providing a peaceful cycling experience. I stayed on the park connectors and side-walks where possible, but ventured onto the quiet roads when necessary.

The stretch from the East Coast Park to the Marina Barrage, and then continuing behind that to Keppel Road and the West Coast Highway until Alexandra Road was familiar territory from my previous rides. Took a snack break at about 7pm at a fast food place, one of the few places open, in mall near Labrador MRT.

It was peaceful as I continued along the West Coast Highway. Noticed the renovated exterior of the Haw Paw Villa. Further down, beyond Clementi I was surprised to discover that there were many private housing developments on the right of the highway, facing the industrial buildings on the other side.

I missed the turn into Jalan Buroh and the planned route along the south of the Pandan reservoir, so I cycled on along Jurong Town Hall Road. At this point I had a craving for a hot drink, and detoured to Jurong East MRT which had a big crowd gathered about the malls. Again only a few fast food places were open, but it was enough for me to get re-energised on a hot milo there. Discovered the location of the new Ng Teng Fong hospital across the road.

From there I continued along Boon Lay Way, a new region to me, until Jalan Bahar, a name that was vaguely familiar from my NS days.

Went up Jalan Bahar and took a rest and refreshment break at a void deck of HDB flats. I had to decide whether to press forward through what the map indicated to be a long stretch of forested area, or to take a nap. I tried napping but couldn’t doze off, but the rest was sufficient and I felt I could continue. I felt re-assured that there were bus-stops along the stretch that could provide shelter in case it started raining. 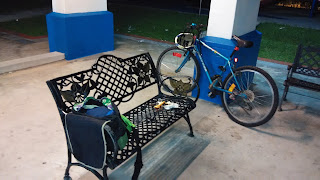 Passed the entrance to NTU and then the huge Civil Defence Academy. There was nothing else to see along that stretch of Jalan Bahar, and it felt somewhat spooky. Beyond that it was the wide and straight Lim Chu Kang road, which felt peaceful despite the signs and paths pointing to the cemeteries on the left. 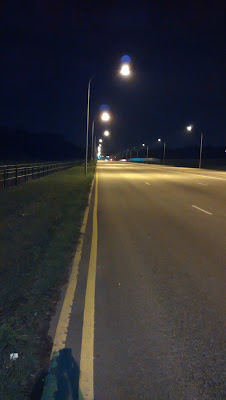 By now my legs were beginning to ache, maybe because I hadn’t cycled for a long time before the day's event, and maybe because I had just recovered from a bout of stomach flu. I needed to rest my legs, which I did at a bus stop along LCK road. It was midnight. 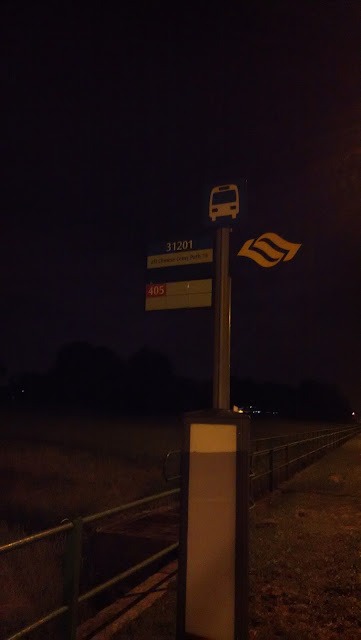 LCK road never seemed to end, but eventually it did become narrower and winding, with more greenery. I took more breaks as I went along, one outside the Sungei Gedong camp, another name familiar from my NS days. 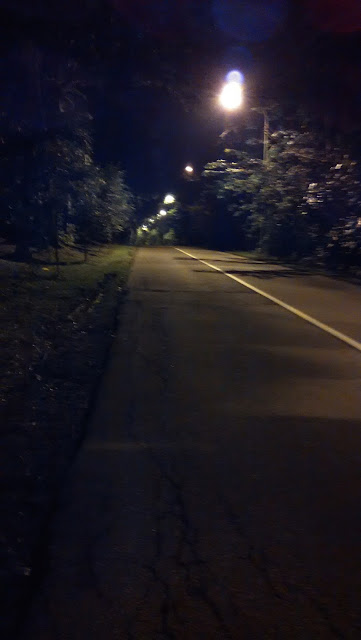 
It wasn’t completely deserted, as at least one vehicle passed me every minute or so. But I saw only one or two other cyclists that night, the rest appearing only later around sunrise.

I heard what sounded like life-firing outside the life-firing area, but was surprised that such an event would be going on on that day. It sounded more like fire-works, but why would there be fire-works in this secluded place? The mystery would be solved a few kilometres down the road.

Turned into Neo Tiew Road, passing many farms, and the entrance to Sungei Buloh, before emerging onto Kranji Way on the dam forming the Kranji reservoir. 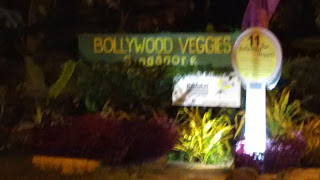 From here I could look across to Johor Bahru (Malaysia), and see and hear them celebrating the Lunar New Year with fire-works. 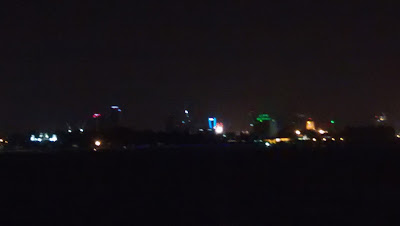 View of JB from Kranji Way

My leg muscles were tight and aching, the rest stops and self-massages not helping much. That is when I discovered a solution. I found that walking actually released the tension in the muscles. Maybe the walking and cycling muscles were complementary.

So my new strategy was to walk my bike up steep inclines, cycle along flat stretches on low gear (to save my knees), and let gravity do all the work on down slopes.

I needed a good meal, and a web-search indicated a 24 hr fast food place at admiralty MRT. It took immense effort to continue till there, through Kranji Road, into Woodlands Road, Woodlands Ave3, and Woodlands Ave 7.

Reached the place at about 3.30am and was disappointed that they had no whole day breakfast and no toilet. Got a meal anyway, replacing the sugary drink with a hot milo. The meal and rest did me good. In fact I dozed off there, maybe encouraged by another “auntie” who was taking a cosy nap nearby. The other patrons were all youngsters. 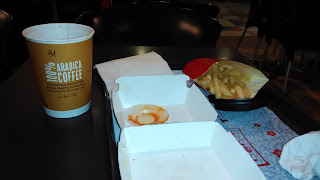 To Quit or to Continue?

I then had to decide whether to continue with my plan, there was still a long way to go, or cut the trip short. I felt that I would probably not try anything as crazy as this again, so I had better finish the job, albeit slow and easy. (The last time I did such an endurance event was decades ago during my NS days, but back then I didn’t have a choice).

From Admiralty, I followed the MRT line to Yishun. By then, 5.30am, the buses and MRT were starting operation and some people were going to work! Took a toilet break at the mall at Yishun.

Then I cut through Yishun Central towards Ave 1 and the dam across the Lower Seletar Reservoir, essentially reversing the path I had taken on another cycling trip. I turned north into Seletar East Link which seemed depressingly unending. It was along this stretch that I saw many early morning cyclists. One of them gave me a wave of encouragement when he saw me walking my bike during one of my walk-ride stretches. 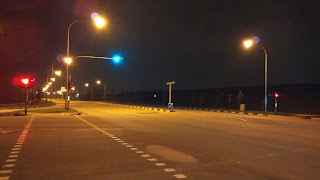 
Hit Punggol by day-break but couldn’t make out how to get onto Coney Island quickly (to see the cow), so I settled for a ride along the waterway. This was the first time I was in this area at daytime, so I got to view the existing and the many new flats under construction. 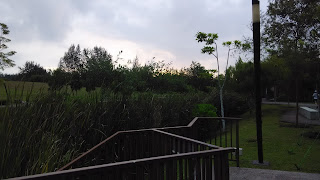 
Crossed over Lorong Halus into Pasir Ris and was in very familiar territory. Found a coffee shop open in Elias Mall along Pasir Ris Drive 3. That was my breakfast stop. 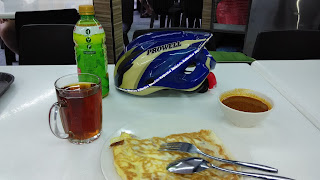 Now I got my second-wind and felt the mission was on back on course.

At the end of Pasir Ris Drive 3 I saw a petrol station and felt maybe it would be good to pump up my back tire a bit more. Unfortunately I ended up deflating it and had problems re-inflating it. Another cyclist, a good Samaritan tried to assist me but we ended up damaging the inner tube.

Without much thinking I continued walking along Loyang Avenue towards Changi Village, hoping to get repairs done there. But the two bicycle shops there were closed as it was the first day of the Lunar New Year ( I didn’t know there was also a bike shop along the park connector that might have been open).

So with much trepidation, I locked my bike in front of the hawker centre and took the bus home on Monday, 8th Feb 2016, at about 11am.

At least I was lucky that my cycling had not been interrupted by rain, though I had come prepared for that possibility.

I rested on the 8th and recovered by the 9th , helped by a good massage and good food. Finally, on the morning of the 10th, I headed for Changi Village. Was very happy to find my bike still there and in one piece. Got it fixed at the bike shop that had opened. Also decided to get some DIY tools to fix similar problems in the future.

Rode home contented along the Changi Coastal Park Connector and got to see Terminal 5 and the new runway under construction.

It started to drizzle lightly but fortunately there was no downpour and I made it home.


Epilogue
An exhausting trip, but worth the try. Good to see many relatively rustic sights still existing in Singapore.

I had to depart at parts from my original plan, so there are things that I probably missed. Well, that’s another opportunity calling !